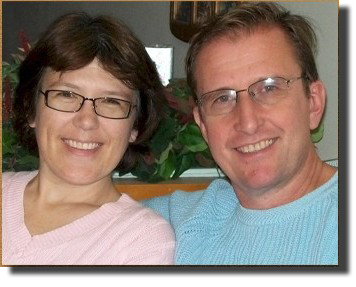 You never know when you've just invited a future missionary to meet the Savior. Mikki came to the Lord when an elderly neighbor lady invited her to Vacation Bible School at the age of 12. Mikki was saved that week and continued to attend Oneida Gospel Church in Grand Ledge Michigan.

Mikki's singing voice developed at an early age and singing was always a part of her life growing up. When she graduated from high school, she studied music at Albion College and Michigan State University. During her sophmore year, tragedy struck her family. Her mother developed cancer and died in 1988. At the same time, she developed nodes on her vocal cords and the doctors put her on voice rest. It was a very stressful and confusing time in her life. Because of the nodes, she was not able to complete her music degree. She changed to a humanities major and took French classes.

The summer of 1988, Mikki visited Niger as a short term missionary with SIM. She worked with youth and women's literacy in the east central part of the country. After the summer, she completed her degree at Michigan State University. Sensing the call of the Lord back to Niger, she attended candidate school in the summer of 1989. She was accepted as a career missionary with SIM and was appointed to work in Niger. That Fall she enrolled in seminary at Columbia International University.

In 2006, Mikki completed a master's degree in education at the University of Nebraska at Lincoln.

Steve was born in Congo where his parents were missionaries. They left the field when Steve was only 2 and Steve's Dad became a pastor in Saskatchewan, later he would become the director of a mission agency known as Grace Mission, Inc. So Steve was exposed to missions at a very early age.

Steve was a missions major at Grace University from 1981-1985. While at Grace, Steve too sense theLord leading him to missions. After Grace Steve attended Dallas Theological Seminary. While at seminary, he was challenged by Les Unruh, an SIM recruiter, to consider ministry in Sub-Sahara Africa. At the same time, Steve's brother Mike was also praying about this part of the world. Mike and Steve went together in 1988 to Niger for a summer. They stayed with Ralph and Maridee Sauers who were ministering among the Tamajaq people. The Sauers' lives and heart for the people had a deep impact on both Steve and Mike. That summer both found the confirmation that the Lord was leading them to work in Niger.

Steve and Mikki actually met on the short-term trip in 1988 to Niger. But truth is that they didn't work in the same area so they had no chance to be anything but casual acquaintances. The following year however they met once again at candidate class in Charlotte NC when they both joined SIM.

After the month of candidate orientation, Steve and Mikki parted ways but continued to write, Steve from Dallas and Mikki from South Carolina. After 10 months writing letters, Steve dug deep and found the courage to ask the question. They were married August 25, 1990.

After the wedding they both worked for 5 months and then began their tour of resource development and preparation for returning to Niger. By Fall of 1991, they had their support and enrolled in French classes in Quebec City,Canada. They finally arrived back in Niger June of 1992.

When we first arrived in Niger, we started learning Tamajaq in the small city of Tahoua. This was tough year. A new country, a new culture, new life. We sometimes have described that first year as being invited to play cards with people who play together all the time but they didn't bother to explain the rules to us. After one year we moved south to Madaoua to work among the Kel Geres people (a sub group of the Tamajaq).

From 1993 to 2003, we lived and worked in Madaoua. We continued to study Tamajaq as well as learning Hausa which is the trade language of Niger. Much of our work involved spending time with people and bringing them in contact with the Scriptures.

In 2003, we accepted the call to move to Niamey be a part of the field leadership team. Mikki took a position at Sahel Academy which is a school primarily for missionary children (K-12). She is part of the adminstration team and teaches classes.

In 2011, Julie graduated from Sahel Academy and is studying at Grace University. Julie is preparing to be an elementary teacher.

Andrew graduated in 2013 and is studying electrical engineering at the University of Nebraska at Lincoln.

Brian is a high school student at Sahel Academy. He will graduate in 2016. Brian plans to attend Grace University in the Fall of 2016 and prepare for youth ministry.